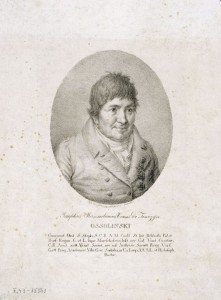 Józef Maksymilian Ossolinski (1748-1826), a writer, collector and scholar, was a member of many learned institutions, such as the Warsaw Scientific Society, the Wilno Academy, the Cracow Academy, the Royal Societies in Prague and Göttingen, the Imperial-Royal Society in Vienna, and a doctor honoris causa of the Jagiellonian University. With the foundation act of June 1817 he handed over to the Polish nation valuable collections of books, manuscripts and museum pieces, and at the same time he defined the character of the Institute’s activity, which was to save the cultural heritage of the nation devoid of its statehood by drawing on the resources of Polish literature and museum collections.

The source of the Institute’s upkeep were revenues from the Founder’s landed estates. From 1827 to 1945 the Institute was housed in Lwów and its existence was vital to the activities of the Faculty of the Humanities of the Jan Kazimierz University.

Initially, the Institute was to consist of two branches: the Library and the Publishing House. However, as a result of an agreement between Józef Maksymilian Ossolinski and Prince Henryk Lubomirski, who decided to hand over his own museum collections to the Institute, a third section was created in 1824 by the name of the Lubomirski Museum. The post of the literary curator – the Institute’s highest authority – was to become a hereditary function of the Lubomirski family. From the very beginning, the Institute served Polish science and education and cultivated patriotic traditions. In the years of national bondage the Ossolineum published Monumenta Poloniae Historica, a critical edition of Samuel Bogumił Linde’s Słownik Jezyka Polskiego (Dictionary of the Polish Language) and numerous other works from the fields of history, history of Poland, literary sciences and history of culture, important for the Polish science.

In the period of the Second Republic (1918-1939) the Institute developed dynamically. It published scientific works as well as belles lettres and became one the leading publishing houses of the independent Poland. During that time the Ossolineum holdings were enriched by many new collections, including those of the Lubomirski family of Kruszyna, the Potocki family of Raj, and the Jabłonowski family of Bursztyn, as well as by numerous bequests made by Polish scholars.

The National Ossoliński Institute in Lvov

During the Second World War the printed collections of the Library were doubled as many private collections were stored there for safety, including those of the Baworowski and Dzieduszycki families as well as numerous donations and deposits made by the civilian population.

After the war Lwów was incorporated into the Soviet Union. Only a part of the Ossolineum collections was transferred from Lwów to Wroclaw. These collections were made accessible to the public as early as September 1947. The source of the Institute’s upkeep in the new historical circumstances, after the nationalisation in 1945 of all landed estates, was the state treasury. In 1953, the Ossolineum Library and Publishing House were transformed into branches of the newly created Polish Academy of Sciences. The Ossolineum collections constituted a scholarly workshop for the Wroclaw humanities as they reemerged after the war. The bulk of the collections remained, however, in Lwów, including autographs, diplomas, drawings and prints, photographs, numismatic objects, medals, seals, periodicals and a part of the manuscript collections. At present a report is being prepared on the losses sustained by the Ossolineum Library as a result of the transfer of national borders after the Second World War. These losses are estimated at about 60 percent. Efforts are being made to recover the Ossolineum collections.

In 1990 the post of Ossolineum’s director was assumed by Dr Adolf Juzwenko , who undertook efforts to reactivate the Foundation – the original status of the Institute. On January 5, 1995 the Parliament of th Republic of Poland passed the act on „the foundation – the Ossoliński National Institute (Official Gazette 1995, no. 23, item 121). On the strength of this act patronage over the Institute was assumed by the President of the Republic of Poland and the direct supervision is performed by the Board of Curators.

The National Ossoliński Institute in Wrocław

For almost two hundred years of the Institute’s activity, the collections handed over by the Founder to the Polish nation have constantly been enlarged, mainly through donations, exchange and purchase. Altogether, the Ossolineum collections of the nineteenth and twentieth century books and periodicals, old books, manuscripts, prints, maps and numismatic objects comprise at present ca 1,800,000 items. It is a constantly growing stock. Each year ca 10,000 books and 5,000 units of periodicals are added to it. Special collections grow by several hundred items yearly.